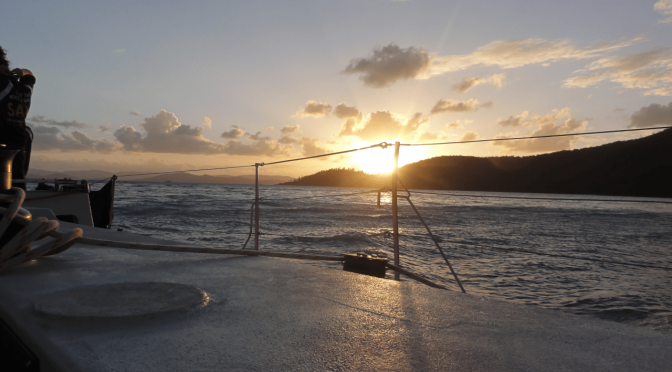 Lets’s review my first Australian Contiki Tour. The Beaches and Reefs tour is part of the bigger Aussie Explorer tour in Australia.

If you’re interested in doing the Aussie Explorer tour this article maybe right for you, as it features about 60% of the tour you’re going to do.

Aussie Explorer is a 2 part tour. The East Cost from Sydney to Cairns and the second part from Alice Springs to Darwin (or reverse).

The Beaches and Reefs Tour goes from Sydney to cairns (or reverse). My first Australian Contiki starts in Sydney.

Day 1 An early morning. After filling some forms and handing our tickets to Justine (our tour manager), we loaded our baggage in the coach. Then we took our group photo in Sydney with the Harbour Bridge in the background. At lunch we headed to Port Stephens for a nice dolphin cruise. Then we enjoyed the afternoon at the Shoal Bay Resort and Spa. And yes, we had a room party 😉

Day 2 we drove to Coffs Harbour, stopping in Port Macquarie for lunch. At this place we stayed at a Surf Camp in little containers and had our first surfing class. Our container didn’t have a toilet, therefore we received a voucher worth 150 AUD for photos and a free T-Shirt.

Day 3 we headed to Surfers Paradise, stopping in Byron Bay for a few hours for lunch. On our way to Surfers Paradise, we stopped at Cape Byron which is Australia’s most eastern point. Then, we crossed over to Queensland and visited the Currumbin Wildlife Sanctuary where we pet kangaroos and took photos with Koalas.

Day 4 was a day for optionals and free time at Surfers Paradise. I spend the morning jumping out of a plane. Sky diving at the Gold Coast with a landing on a beach. It’s just amazing.  In the afternoon I spent some time at Billabong and took lots of photos. Then we went out to Sin City with the whole group.

Day 5 we stopped at Brisbane, capital of Queensland for a few hours to experience the city. We also saw a presentations about opals. The we drove to Noosa, a trendy beach town.

Day 6 most of us booked the optional 4WD Fraser Island Day tour which took us all through the island’s sandunes, rainforests and freshwater lakes. Swimming at McKenzie Lake and a nice BBQ afterwards.

Day 7 After a night in bunk beds we headed to a country homestead in the heart of Queensland. Most of us dressed up in our western gear for our big roast dinner and then Karaoke night!

Day 8, 9, 10 involved sailing around the beautiful Whitsunday Islands on a racing sail boat. This was not the relaxing yacht ride that many of us thought we were in for. When we were sailing, the boat sat at a 45 degree angle so we would all have to sit at one side of the boat. Sailing included us hanging our legs over the edge, taking in the beautiful views of the islands. We also stopped at a few places where we got to snorkel and see lots of amazing fish. We enjoyed Whitehaven Beach. A few of us even tried sleeping out on the deck under the stars the first night, but it started to rain. The third day in the Whitsundays we stayed at Daydream Island. it’s a big island resort and spa hotel.

Day 11 we continued our journey to Cairns, stopping in Townsville on the way for lunch.  It was also Australia day. Party time!

Day 12 started bright and early. A few of  of our group (including me) headed to AJ Hackett for bungee jumping and Minjin Swing. I opted for the Minjin swing.

Day 13 the whole group went on an optional Great Barrier Reef cruise where we spent the day snorkelling and scuba diving the most beautiful reef. At night, we went out in Cairns to the Woolshed for our last night as a group.

Day 14 we made a stop to the rainforest village of Kuranda to see an Aboriginal Experience. We also got to throw a boomerang. Then we made our way back to Cairns Colonial Club Resort. We enjoyed some refreshing Australian beers and said goodbye to some tour mates in our group.

This tour is just awesome. You see so much from the East Coast of Australia and you also have fun at night with night clubs, Karaoke on a farm and a nice sleep under the stars.
My personal favourite is sailling between the Whitsundays and going Sky diving at the Gold Coast.
You have to do this tour!