More and more visitors come to my blog, because they want to know how mobile internet works in Australia.

If you own a netbook or tablet with integrated 3G, it’s very easy. Get a Sim starter kit from an Australian network operator (e.g. purchase at Australian Post store). Activate your data Sim and book a data option. How does this work? Staff from the stores can help you. Also, often there’s a manual included with the starter kits, explainig how you can activate it by yourself either online or by phone. Just insert your Sim card into your device and start the software.

If you don’t have a netbook with integrated 3G, there’s an alternative. Use an 3G USB Modem. All 3 major Australian mobile network operators offer them for a plus on top of the Sim starter kit.

The network operator Telstra offers e.g. a 3G USB-modem + 2GB data allowance for just $59 AUD (as of writing). After you purchased and activated your USB modem, you just have to connect it to your computer and follow the instructions on the screen.

Another cost effective way is that you use your smartphone. This method is known as WiFi-Tethering. With this method your data connection on your smartphone will be shared via WiFi with devices like netbooks or tablets. Naturally this makes only sense if you have booked a data option with your tariff. E.g. the network operator Telstra offers the BROWSEPLUS49 Pack with 3GB data allowance included for just $49 AUD (as of writing).

Most Android smartphones have  built-in feature known as “WiFi-Hotspot/Mobile Hotspot”. Just enable Mobile Hotspot and connect your Netbook via WiFi, like you would do at a coffee shop.

The following video shows, how it works on a HTC Smartphone. 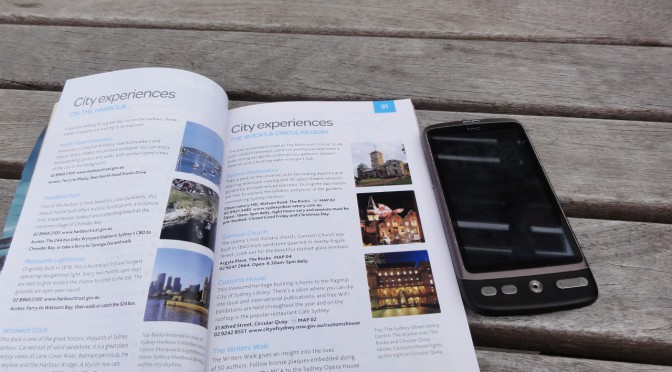 More and more visitors come to my blog, because they want to know if their smartphone works in Australia.

Which network operators are available in Australia, has been answered in part 1 Mobile Internet in Australia – General.

In this article I want to tell you, which smartphones should work in Australia.

*Vodafone Australia’s Extended Coverage 850 MHz 3G network not available.
This is just a selection. There are more manufactures/models that support Australian mobile networks.
All information provided “as-is” and without warranty. This table based on the supported frequency bands listed on the source websites.

Generally speaking, if your smartphone supports UMTS (“3G”)  on 2100 and 900 MHz, that it should work with Optus and Vodafone. Does it also support UMTS 850 Mhz? Then you can get more coverage on Vodafone and also connect to Telstra. The mobile operator Telstra is according to their own statements the biggest network operator in Australia. Telstra’s 3G network works exclusively on UMTS 850 Mhz. All operators also have GSM networks, but these are much slower than 3G and not recommended for smartphones. If GSM or 2G is enough, than look for a smartphone with “Quadband” GSM.

Update: I am working on a list of models from Asia and the US.

I get a lot of emails about mobile internet in Australia. How does it work? Which carrier to choose?

Because I use mobile internet in Australia and New Zealand, here’s a guide to this popular travel related topic.

In this part I will talk about the different network carriers and their networks.

In Australia all major carriers offer prepaid tariffs, like in Europe and Asia. Unlike in Europe, they use different networks. Which means that you should look for a provider that matches with your smartphone, netbook or internet stick specs. More on that later.

Telstra is Australia’s largest network provider and has a mobile network that reaches even partially into the outback.
Telstra uses 3G/UMTS 850 MHz as their main network technologyy. There is also a 2G network based on GSM, but this is only available in larger cities.

There is also the provider Vodafone Australia, which has a GSM network. Just like Telstra, Vodafone Australia also has a 3G network based on UMTS. It uses the in Europe common 2100 Mhz frequencies in major cities and 900 Mhz in “regional areas” (rural roads, small towns). Additionally Vodafone also builds a network on 850 MHz to increase existing capacity.

Did you choose for Telstra, it’s very easy to get a sim card. You can get Sim Starter Kits for $ 2 AUD in the branches of Australia Post. It must be charged with a balance, because it comes without talk time/sms/data allowance. Alternatively, you can go in one of the Telstra stores.
To activate a Telstra sim, you have to call the phone number listed in the starter kit. At my first activation I was asked for my passport number and an Australian address. I said that I’m a tourist and therefore can only provide a hotel address.
She immediately replied that it is no problem. Then I was asked if I want to activate the sim as a data sim (ie for netbooks, UMTS Sticks, ..) or for a mobile phone.

A few minutes later I was able to go online, recharge my pre-paid sim and booked a data package.

Please ensure that your device (smartphone, netbook, …) supports UMTS 850 MHz, as Telstra uses it for most parts of the network.

My advice: Buy on arrival at the airport. E.g. there’s a Vodafone booth in the Arrival Hall of the Sydney International Airport where they’re already specialised in tourists. They have prepared appropriate forms and brochures. Vodafone uses for most of its network UMTS 2100 Mhz (same as in Europe) and 900 Mhz.
I.e. Most European smartphones work in Australia with Vodafone Australia.

My advice: Purchase a sim card at the airport. There is an “Optus! Yes” store in the Arrival Hall of Sydney International Airport. Optus uses for most parts of its network UMTS 2100 Mhz and 900 Mhz.
I.e. Most European smartphones work in Australia at Optus.

More on device compatibility in the next part of this series.

After a relaxing long night we’re finally in the Tasman Sea between Australia and New Zealand. It’s time for breakfast.

I decided to eat an Omlet. It was okayish.

We arrived on time at 9:30 in the morning at Auckland International Airport. After walking through the airport and through immigration and baggage claim I finally made it to the public area in 1 hour.

A nice lady with a dog inspected most of the passagengers bags at the baggage claim area. I heard a lot “Oh, is it a she or he? Oh she’s so cute!”.  🙂

Need a sim card for your phone? In the departure hall is a Vodafone store located. They sell sim cards (prepay sim) and phones. I opted for a prepay sim with data package as addon.

Are all people so nice at the airport. Even the girl at this Vodafone New Zealand store is so kind. She asked me what type of phone I have and what I want to do with it while I am in New Zealand..

Keep in mind: Not every phone works with any network in the world, even when it’s unlocked. I told her that I have an European HTC Sensation, which works with the Vodafone 3G Network both on 2100 Mhz and 900 Mhz. “I guess you don’t need help to put your new sim card into your sim card, do you?” 😉

A recommed the supa prepay sim starter kit for under 30 NZD. Itcomes already with a data package and 2500 free text messages to any NZ mobile phone.

It also givves you the choice to add more addons like data packages and international calling minutes.

Then I headed to the currency exchange counter. Another friendly person greeted me. Are all people so nice in this country? I exchanged Euros and Australian dollars into New Zealand dollars.

Let’s get to the City of Sails also known as Auckland . I already knew that there’s a direct bus line right outside the International Terminal.

I enjoyed the ride to Auckland downtown. About 45 minutes later I arrived at the bus stop right across my hotel. The Mercure Auckland.

The entrance to the lobby is a bit hidden, but found it.

I checked in and took the elevator to the 8th floor. Yeah Harbour view! 🙂 (I booked it for 45 €/ night). The hotel is pretty nice, clean and right in downtown Auckland.

The day is still early, time to explore the City of Sails.I walked to the Harbour and enjoyed the wind and the fresh air.

Later I contacted a girl from Wales who’s also on my Contiki tour in New Zealand. We met in the lobby and walked to the harbour a freshly made Subway sandwich. On the other side of the world with a nice girl from Wales enjoying together the great night weather with a healthy sandwich.

I went to bed early, as a got a bit tired.

My plan for the next day: Explore Auckland!

As you’ve already read in a previous post, my shuttle was not there (any longer). Of course I had the phone number of the shuttle service, but because of the expensive call rates in Australia with an European SIM card I shifted the call. Let’s buy an Australian SIM card!

Vodafone and Optus have both stores at the Sydney International Terminal International airport in the arrival hall.
I decided to go for Vodafone, although I know that they do not have the best network in Australia. I decided to choose the “Flexi Cap” prepaid offer. It has the advantage that I can use the credit flexibly. For $ 49 AUD I got the following features: $ 350 AUD credit for calls to Vodafone Australia network, 3 GB data volume, and $ 350 AUD for all other expenses (“Flexible Credit”). The credit expires after 30 days. The tariffs change frequently, now has the Flexi Cap offer more inclusive services. To activate a Vodafone Australia SIM you have to call the number and enter the code from the activation voucher. After the call, the activation can take “up to 2 hours,” as the employee in the Vodafone store said to me

So, at first late breakfast / lunch. What works the same everywhere in the world? E.g. ordering at Subway restaurants. Let’s go to the departure level! On the departure level, there is next to the check-in area a large variety of food stores and shops (including Australian Post Office).
The way was quickly found, first a few meters along an long hallway and then an escalator. I was standing in the departure hall. After a series of check-in desks is the beginning of the food court. My trained eye saw immediately a Hungry Jack and a Subway next to it.

When you are in Australia, you should I buy some essentials, as soon as you arrive. E.g. Australian sun cream. For Australia, a sunscreen with SPF 30 or 50 is recommended, and I mean according the Australian standard. A European sun screen with SPF 30 protection in Australia is not sufficient. Furthermore, it’is also recommended to buy a hat that protects the head and neck from UV rays adequately.
Both can be purchased at the International Terminal departure level both shops are at the rear right corner . 😉
In addition to a pharmacy and some Clothes stores, there is also a branch of Australia Post. I already have a SIM card for my phone, but I want to go online with my netbook.
As my netbook also supports the network of the reliable Australian mobile operator Telstra , I bought at the Australia Post a Telstra sim starter kit. You get Starter kits at Telstra stores, supermarkets and at Australia Post for $ 2 AUD. The employee informed me that starter kits come with no credit and must be activated later. I replied that I will add funds to the account online by credit card.

After some time, I tried again to call with my phone. I dialed the number of the shuttle company. It rang … So, the SIM card works well without the Internet activation, it just takes some time.