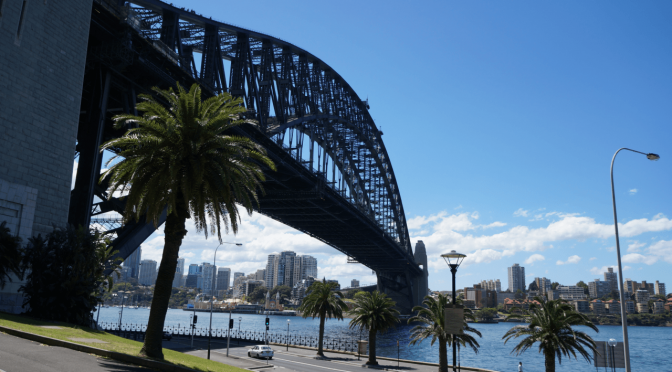 I’ve been thinking (and writing) about Australia quite a lot lately. That’s why I want to present you my top 3 favourite places in Australia in this post.

Whitehaven Beach is a 7km long beach and is considered the whitest beach in the world. I believe it’s true, because I visited this beautiful place. It is accessible by boat aswell by seaplanes.

Some people would say it’s a big city like many another big cities.
I my opinion Sydney is so much more. You have  the amazing Opera House, the Sydney Royal Botanic Garden next door including the St. George Open Air Cinema. You can take a ride on the iconic Sydney ferries to Manly Beach. Sydney also offers a wide variately of food and dining options. And the famous Bondi Beach is only a few minutes away. Watch the Surfers or enjoy some quality time at the beach. There’s even free WiFi!

Kakadu National Park. In my opinion one of the most beautiful national parks on our planet.  It is a protected area in the Northern Territory of Australia, about 170 km southeast of Darwin. So it’s best to plan a long drive or even stay at a hotel near the park area.

7:30am, time to get up. We went straight to breakfast because we wanted to save us the time to shower for tonight. We had only 60 seconds per day for a shower. For 3 days that’s just 3 minutes.

For breakfast they offered cereals, fresh fruits and white bread. Of course, I tried again Vegemite. Many Europeans would probably spit it out immediately because they do not like the extreme taste. I think it’s okay.

We sailed again until 9:00 in the morning, then we took a boat to Whitsunday Island.

Whitehaven Beach is a 7km long beach and is considered the whitest beach in the world. It is located in the middle of the Whitsundays Whitsunday Island. 😉

Before we could relax on the whitest beach in the world. However,

first we had to walk across the island and through the forest. After the forest we were standing at an observation platform, where we did again a group photo of us, the Contiki group of the hammer. At Whitehaven Beach it’s not allowed to wear shoes , so we put our sandals under a shady tree.

enjoyed pastries and salad for lunch. As always, delicious.

After several hours of sailing, including many “attacks”, we set in front of a sand bank and took the raft over. There we had cold drinks and nachos for dinner. Some tour mates collected shells and took pictures.

While some people went at nightfall over to the Condor to rise the alcohol level , stayed a few (including me) on the Hammer and looked at the starry sky. The story that during the night a tour mate went astray on the wrong boat, stays on the Hammer 😉

I slept for some time on deck, but then I moved to my bunk, because it started to rain. Good night! 🙂