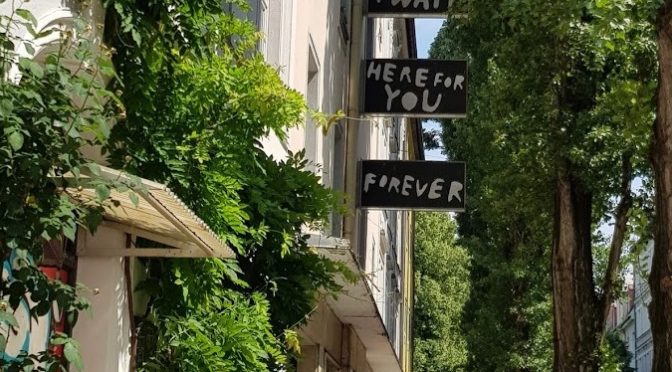 Some of you might know that I live “in the best city of the world”.
Yeah, I know everybody claims that of the place they call home. 😉

I live in München, Deutschland (“Munich, Germany” for the english speaking part of world).
Today I thought I should share my 4 favourite places with you.  Why? Because many travellers to Europe, who go to Germany, seem to skip Munich for Berlin or Stuttgart. The Munich metropolitan area is more than just Oktoberfest and Lederhosen.

In Munich’s metropolitan area you can find Museums, lakes, castles, mountains,… There’s so much to see and do.

In this article I will showcast some places where locals go.

This is a public swimming hall. Equipped with two pools, saunas and steam baths. It was opened in the year 1901 and offers locals and visitors a like a great place to relax.
As time of writing the standard admission fee is EUR 4.80

Enjoying a beer at the “Isar”

The “Isar” is the long river stretching throughout the city.
On mild spring, summer and autumn nights thousands of locals go here to enjoy a beer after work. In the summer this is also a prefered place to do a little BBQ with friends on the weekend.
If you go here by U-Bahn (subway station “Frauenhoferstraße”) you’ll find a little store (“Kiosk”) selling hundreds of different types of local and international drinks and snacks. They even take credit card.

The Olympic village (or “Oly-Dorf” how locals call it) exists since the early 70s. Back in 1972, when the Olympic summer games took place in Munich, the city had to build accomodation for the athletes and nation teams.

They build some tall apartment buildings and a little “village” of bungalows next to the stadions. Because Munich is always in need for apartments, it was decided that the Olympiadorf stays and got enventually converted into a student home. So why feature it here?  Because it is tradition that every new tennant has to paint the outside wall of his new home. Thanks o this tradition this village is now an everchanging art gallery. Hundreds of artistic impressions feature the landscape of the village.

It’s worth a visit when you come to Munich!

Want to go there? Use the U3 line of the subway network to “Olympiazentrum” and follow the signs to “Olympiadorf”.

Yes, there’s a movie threatre which calls itself just “Cinema”.

Why do I want to feature it here? Rainy day or night in the city? You have seen all the museums? Why not go watch a movie?

The Cinema München in the Nymphenburgerstr. (between subway stations “Stiglmaierplatz and “Mailingerstraße”) is well known with expats and movie lovers. It’s a one of those small, old, privately owned little movie threatres with just one screening room. Eventhough they’re none of those big multiplex places, they still have the latest technologies like 4K HDR, 3D and immersive surround sound.
They show EVERY movie in original language (English in most cases), while most of Munich’s movie threatres show the majority of movies in a German dubbed version.
If you want to save some money:
Screenings on Monday and Tuesdays are cheaper.

This movie threatre also made history many many years ago by being the first place in Germany to sell popcorn at the movies.
(source: I read an interview of the owner a couple years ago)